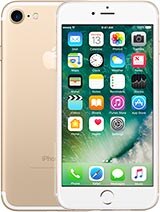 – Apple’s Newborn With Massive Storage!
Apple is touching new heights, iphone7 256GB is the result of their hard work and they have produced a smartphone that carries 256 GB of built-in memory which is a marvelous amount of built-in storage. Apple iphone7 256GB is an incredible phone that brings the latest features along with rejuvenated components. 256 GB memory is a marvelous amount of memory and Apple’s iphone7 256GB doesn’t need to install a memory card slot because it is equal to the amount of memory that all companies are offering in additional expandable memory. Apple iphone7 256GB’s Quad Core A10 Fusion processor is running below the 4.7-inch IPS capacitive display. Ion-strengthened glass is also installed on the front panel to protect the elegant screen from sudden falls. Oleo-phobic coating makes the iphone7 256GB by Apple dust and waterproof. Six core GPU will save the main processor power and help to reduce the energy consumption of a non-removable Li-Po battery. iphone7 256GB’s built-in battery give the talk time up to 14 hours while music play gives 40 hours of battery life. 2 GB RAM is enough that plays an important role while doing multi-tasking on Apple iphone7’s 256GB. Specially made iOS is running inside that gives the feeling of uniqueness to its user. This operating system is only made for Apple products and that’s why it is also installed on the recently launched Apple iphone7 256GB. 12 MP back and 7 MP front shooters are worth mentioning because both cameras are equipped with updated features that make the images vibrant and colorful. Apple 256GB is available in five amazing colors that are jet black, black, silver, gold and rose gold. 3G, 4G LTE, WI-Fi, Bluetooth and Type C USB port are the part of connectivity faculty of this amazing device.