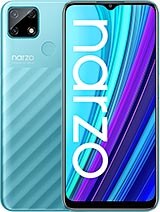 Realme Narzo 30A – All You Want In One Device
Realme unveiled a new Narzo 30A to the Global Market. This Chinese company introduced the Narzo 30 series to the market today. There are two models the Narzo 30 Pro and the Realme Narzo 30A. We will talk about the 30A, Let’s find out the specification of the phone. This upcoming new smartphone will be powered by one of the powerful chipsets available for smartphones in the market that is called MediaTek Helio G85. The Realme’s Narzo 30A has a 2.0 GHz Octa-Core processor under the hood of this handset. This device has a 6.5 inches screen size which is a big-screen display, with an IPS LCD Capacitive Touchscreen, and it has a full-HD display with a resolution of 720 x 1600 Pixels. The upcoming Realme Narzo 30A’s going to have a GPU of Mali-G52 MC2 in this handset. Talking about the Protection of the glass of this device, it has a Corning Gorilla Glass 3. In this handset Narzo 30A by Realme, there are is 4 gigabytes of RAM, which is more than enough to run all kinds of applications, this is a powerful amount of RAM capacity. The built-in storage capacity of this new handset Realme 30A is 64 gigabytes that are a sufficient amount of storage capacity to store anything you want to. There is a microSD card if you need more storage. The smartphone has got a dual-camera setup at the back of the handset. The main sensor of the squad is 13 megapixels wide, and 2 megapixels B/W. The selfie shooter of this Realme Narzo’s 30A will assist the user in taking attractive selfies and making video calls, which is an 8 megapixels camera. There will be a rear-mounted fingerprint sensor in this device, which will allow the handset to protect its data by only allowing the authorized person. The battery of the Realme Narzo 30A is a gigantic one that will offer a 6,000 mAh capacity and also there is a Fast charging of 18W. Samsung and other smartphone tech are making it very tough for other tech giants to compete in the market as smartphones like Narzo 30A’s hit the users with everything they need.